In the last item I posted on the Rangzen Alliance site I referred to a recent piece by Woeser. Having drawn on her comments for that post I think I would be doing her something of an injustice if I did not also bring up a subject that she’s been intensely writing and blogging about for some time now: the exclusion of any mention of Tapey, time and again, when the names (or numbers) of Tibetans who have committed self-immolations inside Tibet are brought up by Lobsang Sangay or discussed in several stories on the subject appearing in the exile media.

Woeser has been writing with great urgency about the issue on Facebook, on Twitter, and on her blog. In many ways she has been single-handedly fighting to have people understand the larger significance of the self-immolations. When one Chinese friend opined to her that “Tibetans who commit self-immolation are fairly lacking in sense… the authorities couldn’t care less about their cries [so] every life lost is to be deplored,” she immediately wrote “No one regrets the loss of life in self-immolation more than Tibetans,” but expressed strong resentment of the judgmental sense of superiority inherent in what she was being told. Her interlocutor was quick to add that “Woeser’s heart is gentle and merciful,” but Woeser insisted on sticking to the subject:

Whatever my heart is like, that’s not at issue… Your comments here are seemingly reasonable. What I resent is [the] feeling of some sort of superiority and infallibility… How can you know that Tibetans who commit self-immolation have no wisdom, no sense? [This is] something similar to what one gets from the authorities… I’ll thank you not to stand on some high stage and evaluate things without understanding the situation in Tibetan areas.

It is obvious to anyone following her writings that the studied refusal to name or count Tapey, whether by Lobsang Sangay or exile media organs has struck Woeser as wrong on the most basic level. This omission has surfaced in interviews with Lobsang Sangay on the Voice of Tibet and Radio Free Asia, and elsewhere, as in the most recent report on self-immolations carried on Phayul.

Most stunningly, reading the names of those inside Tibet who committed self-immolation Lobsang Sangay left Tapey unmentioned as he stood before the Dalai Lama at the Kalacakra Empowerment in Bodh Gaya, listing only those who had sacrificed themselves in 2011. This was difficult to take: 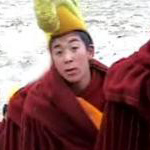 At this relatively important gathering, the Kalon Tripa again did not mention the first instance of self-immolation in 2009; the list he read did not include the first Tibetan inside Tibet to commit self-immolation: Tapey. I need to ask our Kalon Tripa: at bottom, what is this all about?

Is the cleavage between Tibetans in exile and those inside Tibet partly to blame for the different perceptions of Tapey’s place in lists of those who have committed self-immolation ? Many exiles will certainly say there is no cleavage; their leadership may perhaps say so more adamantly. But the differences between exile society and that of communities inside Tibet have long been a subject of discussion and conversation on the part of Tibetans and non-Tibetans. New arrivals from Tibet have even voiced complaints about the way they tend to be regarded by more established exiles.

In this instance, just reading Woeser’s writings on the subject, one can’t help but sense how viscerally the cavalier exclusion of Tapey from the lists of those who have sacrificed themselves is felt by her and, no doubt, by many other Tibetans (a number of whom have made this clear on her Twitter page). For them there is no earthly reason for excluding Tapey—certainly not an insistence on a “start date” of March 2011, in order to be eligible for acknowledgement by the exile authorities. When Lobsang Sangay excluded Tapey from the list of those whose names were read before the Dalai Lama it seemed like more than negligence. Indeed, whatever the actual reason for the omission, it was felt as an insult. There are very urgent reasons for Woeser’s insistence on remembering Tapey whenever those who committed self-immolation are mentioned. It’s not simply that he was the first Tibetan inside Tibet to commit self-immolation, it’s what Woeser said about him, quoted above: “Up to now his whereabouts are unknown; whether he’s alive or dead is unknown. Please! Don’t forget Tapey!”

Woeser is not insisting on simple numerical accuracy. She is, in a sense, pleading for a life. Shot, wounded, carried away, whereabouts unknown… Woeser’s pleas for Tapey’s memory seem like nothing so much as a way of crying out “No, we do not—and will not—leave wounded comrades behind.” Is it because the sense of solidarity among Tibetans inside the PRC differs so drastically from that in exile society, where so many Tibetans now have no direct experience of Tibet, that Woeser’s sentiments seem to make no dent among exile authorities?