Last week I posted an article over at Tibetan Political Review about the Global Buddhist Congregation that was held in New Delhi at the end of November. Since some Rangzen Alliance readers may not have seen it I am reposting it here.

The Global Buddhist Congregation (GBC) that convened in New Delhi from November 27-30 made a bit of news when China reacted harshly to the Dalai Lama’s role in the gathering. Throughout several weeks of buildup to the event (which was designed to bring together Buddhists from all over the world and culminate in the establishment of a new international Buddhist organization) there was no secret that the Dalai Lama was to be the featured guest and that high-ranking Indian figures—Prime Minister Manmohan Singh’s name was mentioned—would likely also attend. China’s protest, however, only came when the GBC was just about to start.

While attendees included Indian MP Karan Singh, the anticipated attendance of other important political figures did not materialize. Still, China lodged complaints; these were met with a refusal on the part of the Indian government to intervene or to scrub the gathering altogether. Indeed, in spite of obvious governmental approval and assistance in different ways (e.g., seeing that visas were obtained by participants who came from over 40 countries, including the PRC) the Indian side maintained that the GBC was simply a religious gathering organized by the Asoka Mission, a non-governmental Buddhist organization. Nevertheless, while the GBC went on as planned, the latest round of Sino-Indian border talks, slated for the same period, was postponed as a result of China’s anger over the gathering

It would be easy to see China’s fit of pique as just another manifestation of politically scripted irritation at any government that allows or is party to activities that involve the Dalai Lama or that give him public visibility. In this instance, however, certain elements add to the more obvious factors that provoked Chinese objections. While the Dalai Lama was actually present for the gathering only on its final day, when he attended an interfaith function at Gandhi Smriti in the morning and delivered the gathering’s valedictory address before hundreds of participants at its final session in the afternoon, his presence hovered over the meeting from the very start. Over the course of the four days on which the GBC was held, several sangharaja, along with Buddhist sangha members from a multitude of countries and a variety of Buddhist traditions, were often unstinting in extolling the Dalai Lama. The unavoidable impression was that he now stands as the most visible living symbol of Buddhism in the world today. His spiritual preeminence was cited time and again over the course of the GBC, and not only by followers of Tibetan Buddhism. Many of those who follow the numerous other Buddhist traditions represented at the meeting acknowledged the Dalai Lama’s overarching spiritual position with language that, in one instance, described him as a lineage holder for all Buddhist schools. Obviously the Dalai Lama’s declared withdrawal from Tibetan exile politics has not negated the international prominence he enjoys, a prominence which cannot be depoliticized by a simple act of will. (So too, his withdrawal from politics is tempered by the fact that he retains control of the dialogue process, such as it is, between Tibetan exiles and China, a fact highlighted a few weeks before the meeting when his primary representative in those talks, Lodi Gyari, let it be known that he does not serve the elected Tibetan leadership. While that is another story, Gyari himself was a very visible presence, flitting around at the GBC during its four days.)

The acclaim accorded the Dalai Lama by Buddhists from around the world added a certain significance to the meeting that China may find difficult to ignore and which makes its objections to the Dalai Lama’s participation in the GBC more complex than the sort of objections it visits on governments that choose to receive the Dalai Lama in an official manner. Indeed, its objections to the Dalai Lama’s presence are fundamentally different: after all, the Dalai Lama does reside in India. That aside, however, given persistent Chinese anxieties over the possibility of being surrounded by hostile powers intent on restraining “the peaceful rise of China,” it is hard to avoid the likelihood that a gathering of Buddhists from neighboring countries such as Vietnam, Mongolia, Korea, Japan, etc., all acknowledging—regardless of sect or school—the Dalai Lama’s leading spiritual position among them, will be seen as a provocation or even a threat aimed at Buddhists (and not just Tibetan Buddhists) within China.

This is somewhat ironic, a triumph of form over content perhaps. For the fact is many, if not most, of the talks presented at the GBC were fairly anodyne representations of Buddhism of the sort that one could imagine being given as dharma talks to curious dilettantes with time on their hands on several continents. Lacking much complexity, there was much exposition on themes of realizing universal peace and love through Buddhist practice. In spite of this, however, and in spite of assertions that the GBC was wholly a religious gathering, the meeting may well be perceived by China as constituting an encircling move all by itself, one that presents an internal threat to the loyalties that Buddhists within China are obliged to hold to the state. (Of course, in real terms that threat doesn’t exist in Tibet, where such loyalties on the part of the sangha are feeble at best.)

What then might China do about this? Well, I make no claim to prescience (hence my hedging “may well be perceived”), but it seems naïve to think, given China’s periodic xenophobic anxieties, that the gathering is not seen in Beijing as a hostile act that needs to be countered. The idea of Buddhists in neighboring countries publicly elevating the Dalai Lama to a position of ever higher spiritual or moral authority is difficult to ignore. Even more troubling, one supposes, is the final act of the GBC, the resolution to establish an International Buddhist Confederation based in India. But what can China do? One is inclined to think the obvious step would be for the PRC to fall back on its own “World Buddhist Forum,” which has met twice in China, in 2006 and 2009. But given the wide-reaching display of respect for the Dalai Lama from so many serious sangha members from around the world assembled in New Delhi, one may rightly ask who would attend such a gathering now. One could only assume attendees from outside China would have to be a rather craven lot, given the repressive image that China has when it comes to Buddhism in Tibet. Indeed, a Chinese counter to the Delhi gathering at this point would likely, from a public relations standpoint, have all of the aesthetic grace and authority of the Confucius Peace Prize, an award concocted as a response to the Nobel Peace Prize given to Liu Xiaobo in 2010. Almost immediately after its creation the Confucius Prize came to be regarded as international joke.

But the necessity of countering the display of veneration accorded the Dalai Lama also reveals how China has, in a sense, created its own conundrum. What counterweight does China have to the Dalai Lama? Well, there is one person, someone who has essentially been groomed for the role. But using him opens up a can of worms that one can hardly imagine China would like to see opened, for this person is none other than the Chinese Panchen Lama, so-called because he was chosen under coercion and foisted upon Tibetan Buddhists in opposition to the child recognized by the Dalai Lama as the incarnation of the 10th Panchen Lama. The problem for China is that their Panchen Lama is not accepted—to say the least—by the large majority of Tibetans who do indeed consider him China’s (not Tibet’s) Panchen Lama. The irony of an officially atheistic state discovering and certifying incarnate lamas has been noted many times but the absurdity of the situation has not lessened. And a state bureaucracy that did not pay heed to popular rejection of a Panchen Lama that it foisted on Tibet over 16 years ago is, in a word, stuck. The situation is so abnormal that the Panchen Lama is not allowed to reside in Tibet, both to keep him tethered to the government and to avoid the unpleasantness that his presence among his ostensible followers might set off. 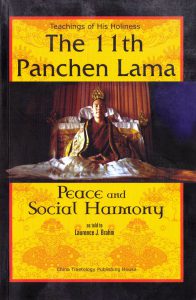 While those familiar with China’s insistence on “social harmony” trumping concerns about things such as human rights should not be surprised to see quotations from the Chinese Panchen Lama on that topic, or on “creating a new society,” his quotations on other topics, such as “peace,” “Shambala,” or “unlimited love,” could have easily fit in at the New Delhi meeting. As already noted, the GBC had more than a few banal, sermon-like talks on such predictable topics. Clearly Teachings of the 11th Panchen Lama: Peace and Social Harmony was meant to be one element in an attempt to transform the Chinese Panchen Lama into an international spiritual figure. But now that the very moment has arrived in which China needs just such a figure, his problematic nature is obvious: the Chinese Panchen Lama, someone who was supposed to be the answer to a problem, is a problem in and of himself, residing in Beijing in a state of alienation from the general Tibetan populace. Put bluntly, he is a walking announcement of the lack of religious freedom in Tibet, a living and breathing advertisement for religious repression in the PRC.

Clearly, if the Chinese Panchen Lama is unusable in the situation created by the convening of the GBC and the establishment of an International Buddhist Confederation it is more than a minor embarrassment for China. He has been groomed for just such a task. But simply bringing up his name will bring to mind the Panchen Lama chosen by the Dalai Lama and held incommunicado since 1995. Indeed, from the time China forced its choice for Panchen Lama on an unaccepting Tibetan population it has been boxing itself in, tying the perception of its policy on religion to a rejected figure. It is a problem that China has wholly created for itself.